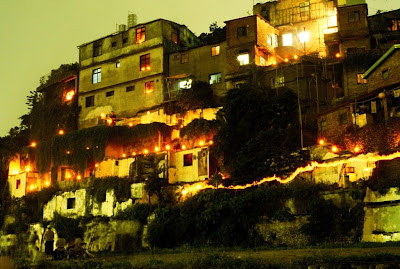 We had met earlier at the Urban Flashes in Linz, where Roan moderated our talks, so we were “aware” of each other. In Treasure Hill I didn’t have any other common language to talk with Hsieh or the original community than physical labour – architecture through spontaneous construction. Hsieh started to build up on the hill and I started from the bottom. We sensed each other’s actions and could make instant reactions of them, communicate and improvise. At some point we met. This is Open Form. 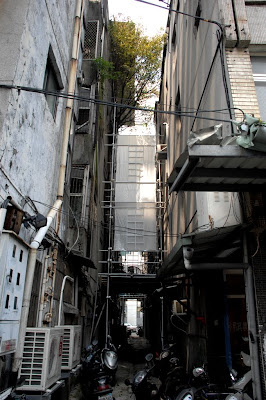 Taipei is Open Form. Citizen design reactions communicating with each other and trying to dominate the no-man’s land like different plants in the jungle. Hsieh takes his commands from the jungle. So does the Taiwanese citizen built illegal architecture. This architecture uses the “official” city as a growing platform and energy source, where to attach itself like a parasite and from where to leach the electricity and water. The layer of illegal architecture combined with other citizen activated spontaneous community reactions such as the illegal urban farms or night markets is so widespread and deep rooted in the Taiwanese culture and cityscape that we could almost speak of another city on top of the “official” Taipei, a parallel city – or a para-city: Instant Taipei. 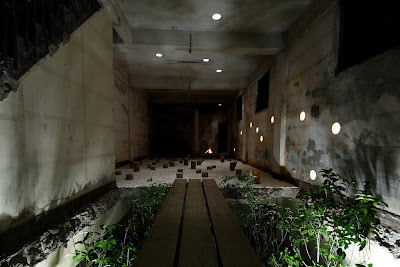 The ground floor of the Ruin Academy in Taipei.

Illegal architecture is Weak Architecture. One tries to achieve the maximum effect with minimal effort. This architecture is as sharp as it is lazy. This architecture has personality and nature and it can disappear as fast as it has blossomed – like an orchid. The official, stiff, hard and boring Taipei is blossoming with Orchid Architecture. The illegal citizen activities are keeping the city alive, they are ruining the faceless industrial city and pushing in the organic. 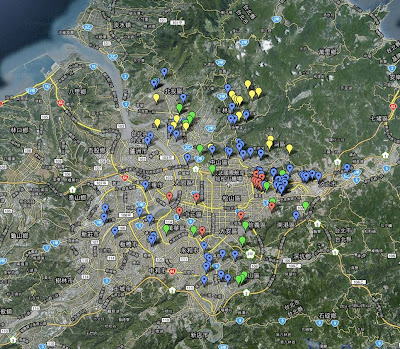 The urban farms and community gardens performing organic acupuncture on the industrial Taipei.

Illegal architecture comes in many forms. You have the horizontal and vertical illegal extensions of the apartment buildings, illegal houses and illegal communities such as Treasure Hill or the Amis urban village by the Xindian River, pigeon houses, beetle-nut booths, temples and even moving architecture like the Taiwanese street-style operas or night-market booths. The point is that this fruitful culture of self-made architecture has only been illegal as long as the “official” city has been in the picture. These flexible, moving, adjustable and pliant forms of urban nomad structures have always been. Official city is the newcomer. Illegal architecture is a new name for the citizen’s right to express himself through architecture. These guys don’t need architects, they are the architects themselves. They are more resourceful and creative that the “official” architects corrupted by the university teaching, building industry and laws and codes of construction. 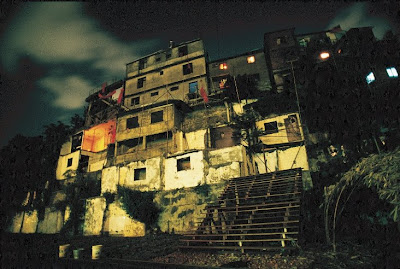 Official city wants to get rid of anything spontaneous coming straight from the human nature. This means “illegal” architecture and “illegal” gardens in the urban stage instead of self-made home and growing of food. Industrial city is a machine designed to regulate human life. Illegal architecture is closer to nature including human nature and so against any kind of control. 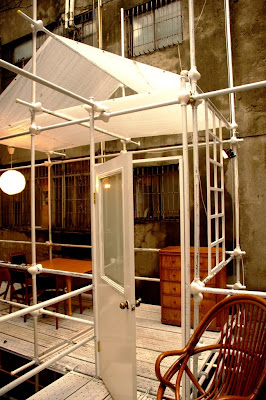 Hsieh getting a bit romantic.

Hsieh calls his style People’s Architecture. Basically this means giving power back to people to build their homes and to self arrange their communities. This is needed in the countryside but also especially in the industrial city. Hsieh wants people learn again to tune their built human environment to the natural conditions, hook up to the site-specific Local Knowledge and experience the architectural landscape through physical labour. 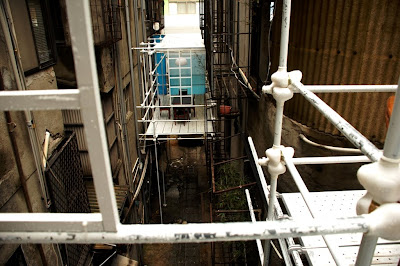 Hsieh wants people to regulate their own built human environment out of official control. Before industrialism and before modernism this has been normal. Now the official city wants to “beatify” the streets from humane architecture, which has become a human error in the official data. 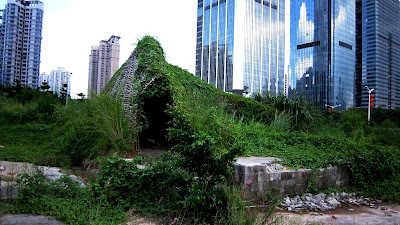 Hsieh, Roan and me form a loose co-operative and we call ourselves the WEAK! In Shenzhen 2009 we build an un-official social club for illegal workers coming from the Chinese countryside to the city. This small pavilion was constructed mainly by some very sensitive guys from rural Guangxi, true masters of bamboo. The Bug Dome is insect architecture merely reorganizing natural materials into a nest or cocoon. The contrast to the surrounding skyscrapers of modern Shenzen is shocking. 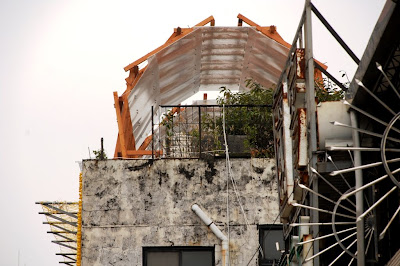 Wang-Shu's illegal architecture on the roof of the Urban Core cafe in Taipei.

None of the Local Knowledge is accepted in the fast growing city. All the natural wisdom that the hundreds of millions of hands moving now from the Chinese countryside to cities is ignored. If this volume of Local Knowledge that is now pouring into the Chinese cities would be recognized, the new Chinese urbanism would have a change to create something seriously new and environmentally sustainable. 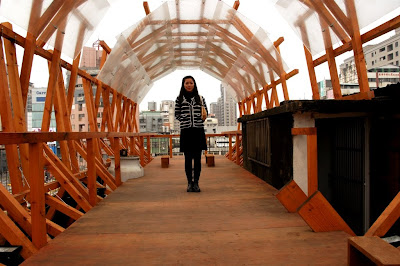 Wang-Shu is an architectural insect. He has recognized the element of Local Knowledge in the new urban construction workers and he is using this sensitivity as the essence of his architecture. Wang-Su is balancing on the razors edge in-between control and accident and he is pushing the architectural articulation to meet the common man, like Hsieh. Crawling, slithering and still surviving... (Coppola: Apocalypse NOW!) In the Ningbo Historic Museum Wang-Shu is building archaeology. The new building is impregnated with memories, subconscious moves and aura that only human presence can transform into a house. Wang-Shu has required the construction workers to improvise within the bigger voice of architectural landscape – a bit the same way as Hsieh with the Sichuan tribes. The outcome is a fruitful mixture of simultaneous architectural control and the breaking of it. The great element of accident is present and this time it is harmoniously talking with the architectural control. Wang-Shu’s museum is a constructed ruin, an ultra-ruin breaking far away from the modernist clichés and the shiny steel and glass surfaces of the new Chinese cities. 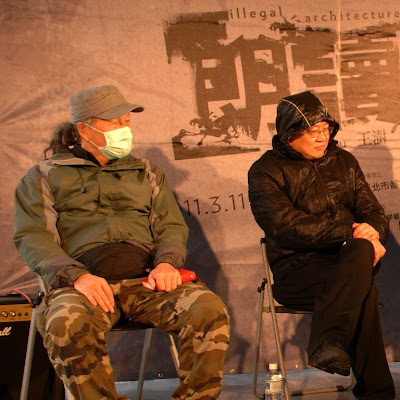 Roan wanted to hook up Wang-Shu with Hsieh and me. He says this is the way how the WEAK! works – we invite people to be weak together. Wang-Su has now built a cocoon on the roof of the Urban Core cafe and Hsieh has grown his architectural creeper structures into the narrow back alleys rooting in the Ruin Academy. Wang-Su has made his cocoon out of wooden sticks, but he hasn’t used any nails. His understanding of three dimensional tension is on the level of the insects. 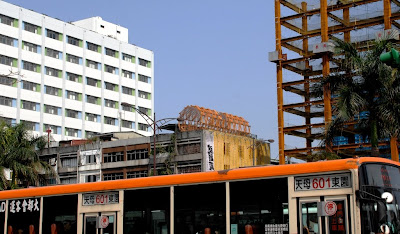 Hsieh has found the fruitful top-soil of the Ruin Academy and he has exploded through the windows and bathrooms to blossom in the space up in the air in-between the buildings. Both Wang-Shu and Hsieh have more air in their buildings than structure. Their works are mediators between the modern urban man and something else, that they know exists on the horizon. What comes to Ruin Academy, we can feel that horizon too. 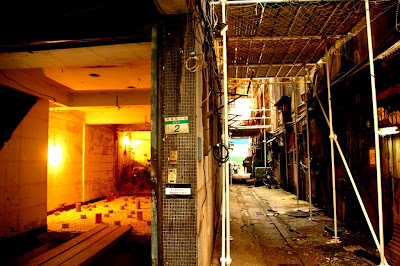 Ruin Academy, left and Hsieh Ying-Chun's orchid architecture on top of the alley.

Taipei should be careful with its steps towards a “beautified” future. If the official beauty means killing the self regulated urban communities, destroying the urban farms and community gardens, cleaning the roof-tops out of pigeon houses and illegal architecture and forbidding people to: swim, barbeque, walk a dog, step on grass, chewing of beetle-nuts, fly kites, fish, street vending, karaoke, gambling, picking flowers, sleeping and picnics ... what is left? Beautified official boredom with a polluted river. 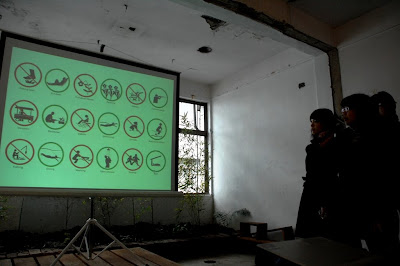 No human error. Ruin Academy researchers redifining the "no". 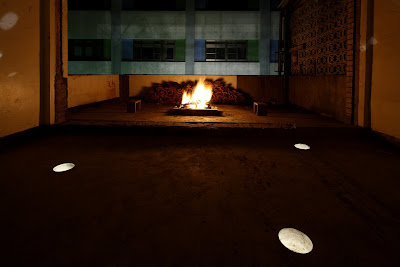