HOUSE OF WIND AND WATER 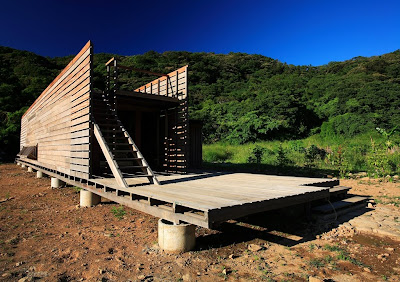 The tilted roof terrace feels like a landing strip on an aircraft carrier, sending people off to the jungle.

“With this house”, says Finnish architect Marco Casagrande, “we were looking forward to designing a ruin.” The statement isn’t meant to prophecy the destruction of the building, but to play with definitions, to provoke an understanding of the project as an unobstructive part of the landscape. When Casagrande further explains his belief that “ruin is when manmade has become part of nature”, it becomes clear that the word has taken on a more positive meaning. It is this more holistic view of man in nature that has inspired the design of a minimal hut set within the grounds of a Japanese cherry farm in the Datun Mountains of northern Taiwan.

But the idea that the structure is wholly subservient to its surroundings belies the sheer elegance and thoughtfulness of the scheme. “It is designed as a vessel to react on the demanding wind, flooding and heat conditions of the site”, says Casagrande, and to this end a number of practical steps have been employed. The spaced wood cladding and large openings permit the strongest wind to sweep through the house, rather than butt against it. Gentler breezes ventilate the rooms on hot days, picking up refreshing moisture from the nearby freshwater reservoir pond that sits between the site of the house and the neighboring farmlands. The structure is raised off the ground, sitting on short sections of concrete pipe in order to allow water to run underneath during periods of flooding. 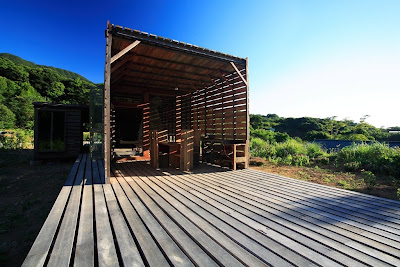 The structure was designed to withstand typhoons, with a raised floor that allows for occasional flooding. This "bioclimatic architecture" is also designed to catch the breeze from the Datun River and a nearby reservoir on hot days. The living area includes a fireplace, also used for cooking. A small bathroom with a sauna is set off to one side.
The basic and very open design makes the building seem more like a rough shelter than a permanent house, but still there is refinement here. The strong horizontality of the house, with its extended outdoor deck, stretches almost to a vanishing point towards the mountains. Its low form makes it less wind resistant, but also an elegant shape on the flat land. The arrangement allows for flexible movement between the indoor and outdoor spaces, while the small bathroom and kitchen section act as ballast, stabilizing the wood structure during the frequent typhoons. There are located in a volume that protrudes from the eastern elevation, an anchoring arrangement that includes a sauna off of the bathroom.

Casagrande explains that the impact of nature is not just a poetic conceit. “There are typhoons, seven to ten each year, and earthquakes”, he says. And then there is the “dragon wind”, which” shoots straight from the cold mountaintop to a hot spot down below. It happened during the construction period, when the ground was not yet cultivated. The wind took down our scaffoldings, even bending the steel tubes.” Mrs. Lee, a local octogenarian, advised the builders to cultivate the land, and so cool the ground before building. “We started gardening immediately”, Casagrande says, and it did seem to help. Mrs. Lee offered further advise: “She told us to get geese to keep the snakes out.” 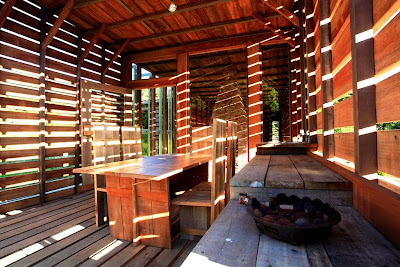 There is a brickwork fireplace for use during the winter months set in the middle of the open living space (rather than against an external wall) to provide maximum heat through the house. A roof terrace is accessed by a stair of the same wood. It slants upward, with high walls at one end and no barrier at the other, only a clear view of the jungle. The chimney, which pierces the roof, is low, so that it can be used for smoking an grilling food.

Built mainly of mahogany, the house has a very elemental quality, especially as the hue has an affinity with the reddish soil that predominates in the immediate area, where vegetation is sparse. But the architect argues that “the house is not strong or heavy – it is weak and flexible.” 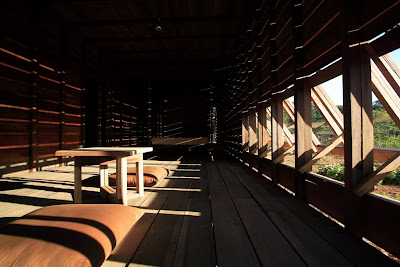 While designed to give the farmers some necessary shelter, Casagrande points out, “it is not about closing out the environment.” Such a permeable design never could close out much of the world, but its virtue lies in the fact that, rather than defying the natural elements, it seems almost to welcome them, while offering robust protection with a lightness of touch. 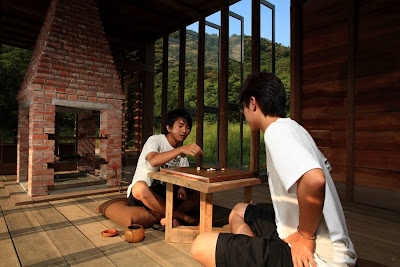 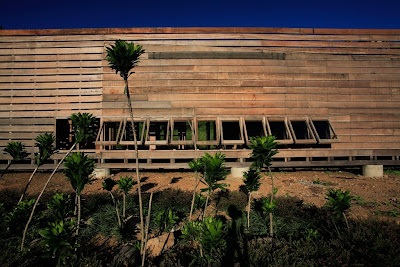