Rebel With A Cause

Marco Casagrande has something to prove. Not for himelf, but in order to defend she who cannot: Mother Nature. 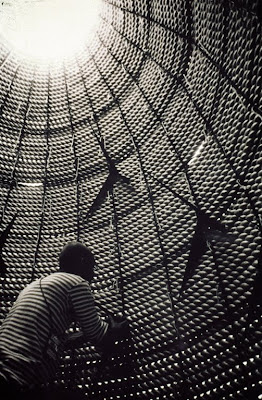 Bird Cage, an architectural installation by Casagrande & Rintala, could be seen at Japan's Yokohama Triannale in 2001. Photo: Nathalie Pozzi.

Architecture need not result in world-famous towers and iconic superstructures. In fact, it can be the mere conception of an idea. An Marco Casagrande fits the definition of an architect as someone who makes a mark without necessarily scaling the heights. His work rocks gently between the balance of performance art and architecture whilst retaining one element that cannot be moved - his beliefs.

Born in Finland and raised in Lapland, Casagrande spent his childhood in a village by an Arctic river. This is important. He grew up surrounded by nature and beauty and is now on a worldwide mission to muster up respect for the environment.

"Destruction of nature effects me. I grew up with it and was taught to respect it as something holy. I see nature as a real strength and a total entity, one which will not exist without us looking after it."

This passion drives him, along with a strong, spiritual urge.

"I feel an inexplicable, persistent force, which can sometimes be a problem," he says.

Self-confessdly teetering on the edge of madness, Casagrande desperately craves connections between modern mankind and nature. He believes that one should not be blindfolded by stress, economics or technology, but remain honest to oneself - "What is real is valuable, and what is not real is not valuable."

Casagrande's fathers side of the family originates from Moconesi, a village in norhern Italy. They are toymakers and circus performers. "There is quite a bit of circus in me too; my family has encouraged me to be myself; without discipline per se."

He goes on to explain his lack of boundaries. "I believe in reality and revolution, but I don't want to define the revolution; as long as nature wins, that's fine."

Casagrande retains a childlike outlook, one can assume for purity's sake.

"My childhood is responsible for who I am today. I have been building all my life, whether it was treehouses or snow castles or making things out of Lego. I always built for beauty, and will retain that mindset."

Casagrande became known early on for his work with fellow Helsinki University graduate, Sami Rintala. Together, they produced a series off installations around the world, combining architecture with aspects of society and nature. They used space, light, materials and the human body as their tools, crossing art over into architecture. 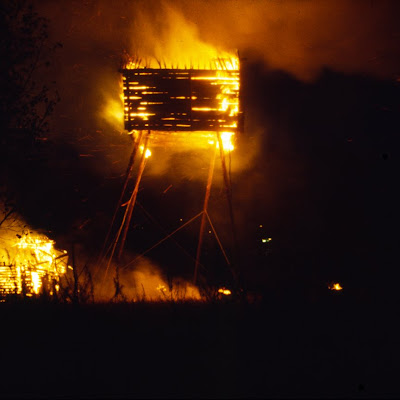 Land(e)scape was their first award-winning project. It consisted of three wooden barns raised on 10-metre stilts, and narrated a time when farmers were abandoning the countryside and leaving to the city. The barns were set alight to represent nature's desolation and abuse.

"I am looking for trouble and architecture is good for that. It's big, so it's perfect for drama and social narratives. My work forces modern mankind to be part of nature. Mine is the dictatorship of sensitivity."

In 2000, Casagrande attended the Venice Biennale and his 60 Minute Man project was tagged as one New York Times journalist's overall favourite. An oak forest was planted in abandoned barge. Beneath it lay 60 minutes' worth of Venice residents' waste. Architectural critic Herbert Muschamp saw Casagrande's message clearly and ensured that he was noted for his architectural annotations. 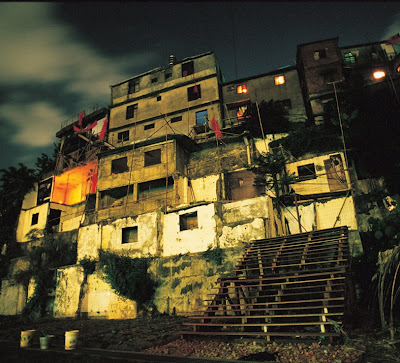 Treasure Hill was a restoration project, and remains as a visible link between mankind and nature. Photo: Stephen Wilde.

On a visit to Taipei in 2002, Casagrande was touched by its humanistic energy yet low living standards. Treasure Hill was the study and transformation of an illegal village into permanent environmental art, and a safe, sanitary community housing block.

Casagrande does not believe in art as such, because he believes that art is everywhere. "I don't call myself an artist. Art it omnipresent, which makes artist redundant."

But at the same time, he understands why many use it as a tool. "Religion need to be believed in, and philosophy warrants discussion. Art is faster." 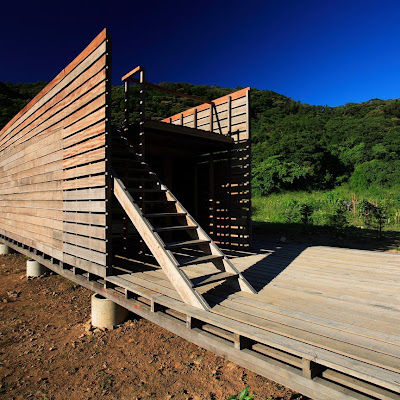 Chen House, Taiwan, is a synthesis of traditional methods, which have been adapted to cope with contemporary conditions. Photo: AdDa.

Unsurprisingly, his architectural firm is different from most. C-LAB is not referred to as an office but a laboratory, and a nature oriented one at that. Furthermore, it lacks the arrogance so often found in successful urban outfits.

"The works are more important than us. We are weak architects, taking commands from the jungle," says Casagrande.

Casagrande's modesty comes from recognising that nature is bigger and better than he. He succumbs to beauty, channelling its power into his cause. And what do eyes that behold such wonder see in Dubai?

"I see this city as compost; it just needs a bit of turning over to release the fertile top-soil," he says, "It should not forget its mystical roots."

Such sensitive, analytical, and overwhelmingly intelligent personalities can be prone to depressive outlooks, yet Casagrande strives to see goodness. His line of thought is a beautiful one, considerate to the core, with a deep love for people and nature reverberating from every piece of work. He is fighting his own battle, making a stand, but it is a well-intended war, and one that is waged on nature's behalf.

My motto:
Fles is more

My best achievement:
Love and inspiration

My influences:
Nature and people

I am...
As close to being mad as you can get, without crossing the line

People react to my work with...
Confusion, which I respect

On being an architect:
This is not a choice. If I didn't do this, I would be insane 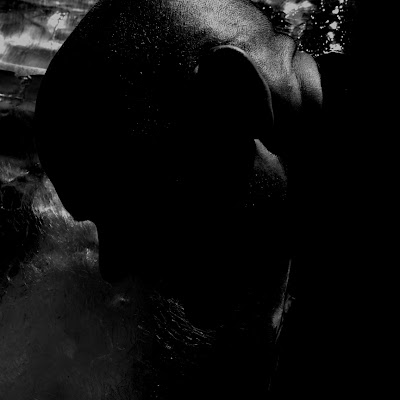 Marco Casagrande is not your average architect. Taking inspiration from nature, he creates works of architecture that are passionate and true to his beliefs.
Posted by Marco Casagrande at 11:51 PM