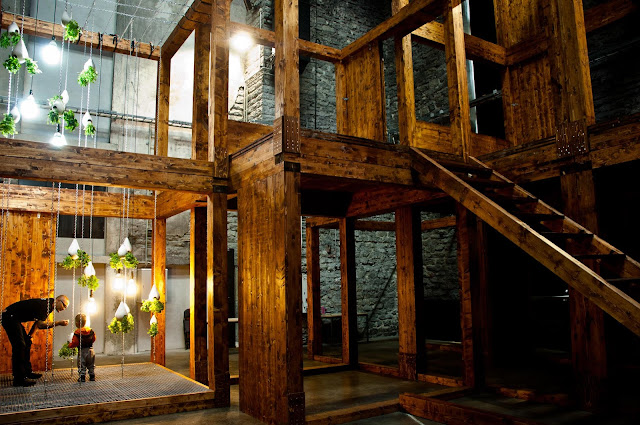 Open form enables the biourban city. An industrial city seemingly independent of its natural environment is replaced by a living organism.

Paracity is a modular urban structure system based on the use of a glue-laminated solid wood grid, a sort of primary framework, within which people can build their homes, create communities and establish cultivations. Organic by nature, Paracity is capable of growing unaided on urban wastelands such as flood lands or slums. This autonomous biourban growth is made possible by modular environmental technology, which provides the necessary ’internal organs’ for the communities created in the process. Paracity is designed to receive, process and convert the waste generated by urban centres into a resource. It serves as an acupuncture needle in the side of a polluting city.

Open form
As it grows, Paracity obeys the laws of Open Form introduced by Oskar Hansen at CIAM in 1959 and developed further by Svein Hatløy in the 2000s. The methodology is based on the idea of communities growing spontaneously through reciprocally stimulating design concepts. Actually, Open Form is very close to the Taiwanese pre-urban tradition of creating self-organising and often unofficial communities. These micro-urban communities are centres of knowledge, which also serves as fuel of growth for Paracity. Paracity is a compost of local knowledge generating the energy that gives birth to urban communities. 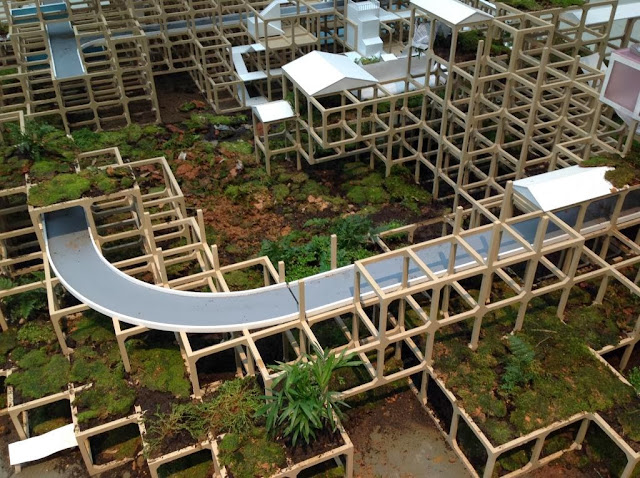 Paracity supplies a growth medium for the development of the community framework to which people add their own human elements. Design does not seek to replace reality. Flesh is More. The primary structure consists of a grid of six or three-meter long glue-laminated beams with CLT panels serving as bracing. The beams are inter-connected using wood joints making it possible for people to extend the primary framework as they wish. CLT possesses excellent earthquake and fire-resistance properties.
Originally, Paracity was designed for areas prone to floods and tsunamis. The entire urban structure rests on CLT posts allowing the water level to rise freely up to the ground floor which is left empty. In the dry season, the ground floor serves as a common living area providing facilities for the exercise of tai-chi, meditation, karaoke, boat repairs, midnight markets and other spontaneous expressions of urban energy.
Biourbanism
Paracity’s biourbanism grows to be assimilated into nature – the structure is auto-ruining. Paracity is a human marshland or compost where the various organic levels overlap and mix to create ‘agritecture’ with nature serving as the collaborative architect.
Paracity feeds on the flows of materials generated by the surrounding city. Even a polluted river serves as a source of energy for this biourban internal organ. Paracity lives and breathes side by side with the surrounding city in a symbiosis like slums: the urban nomads purge the city from the slag produced by it. Paracity represents just an enhancement of the process through the use of modular environmental technology. Paracity is basically a high-tech slum. 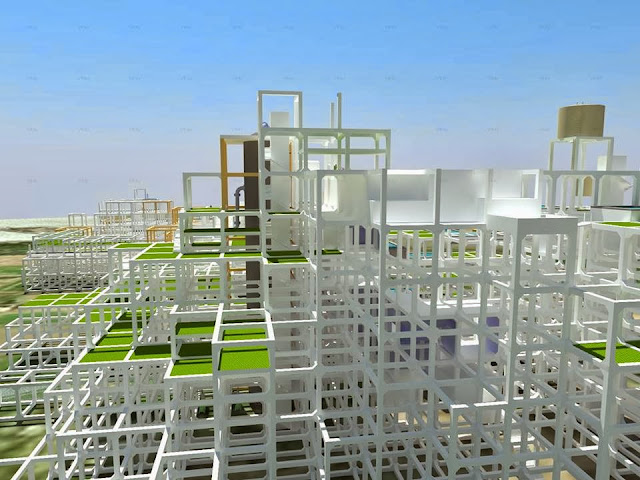 In the Paracity pilot project we have proposed in Taipei, household and irrigation water is drawn from the polluted local river and purified. Pre-purified water is pumped to the roof terraces where it is oxidised and root-purified by plants selected for this purpose. From the green areas on the roofs, the water flows down to the community gardens and urban cultivations. Paracity’s main source of energy is the fast-growing biomass that thrives on the fertile flood lands along the river.
Once it has properly struck root and achieved its critical mass, Paracity will reach over Taipei’s 12-metre high flood wall currently separating the industrially produced urban housing from the river and its environs. The flood wall will remain as an industrial relic within Paracity while the new organic urban structure permits peaceful co-existence between the industrial city and the river. Paracity will serve as a mediator between the industrialised human environment and nature.

The fragments of Paracity scattered around Taipei form a network of urban architecture that steers industrial development towards an organic machine. By ruining the industrialised city, it seeks to reclaim it to become part of nature and a ‘third-generation city’.
Third-generation city
The first-generation city is a built-up human community living in immediate interaction with and depending on the natural environment. Taipei’s fertile flood lands have offered favorable conditions for compact housing and the river has provided food and a means of transportation while the mountains flanking the plains have protected the city from the full force of typhoons. 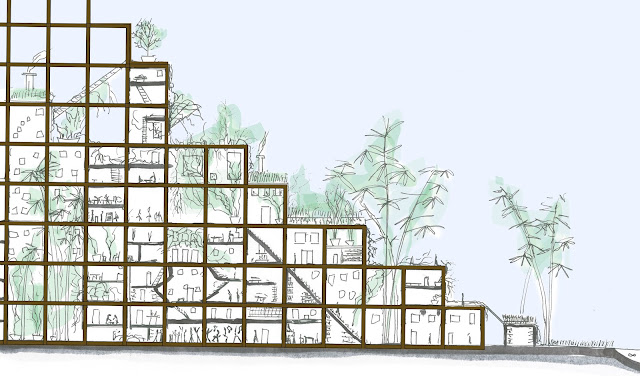 Urban acupuncture is a theory of ecological urban planning that seeks to combine urban planning with the ideas of traditional Chinese medicine. Fundamentally, it perceives cities as multi-tiered living organisms and tries to identify areas and districts ripe for an upgrade and reconditioning. Projects relying on the local traditions and based on the principles of sustainable development serve as acupuncture needles that stimulate the entire organism by curing parts of it.
A ruin is the catharsis of architecture where something man-made reverts to nature. A ruin is the subconscious goal of the industrialised city and the trauma of modern man. Taipei offers an advanced model for the symbiosis where the mechanised city co-exists with unofficial residential areas, collective gardens, city cultivations and urban nomads. With zoning only half-finished, the final touches to the city are put by its residents. 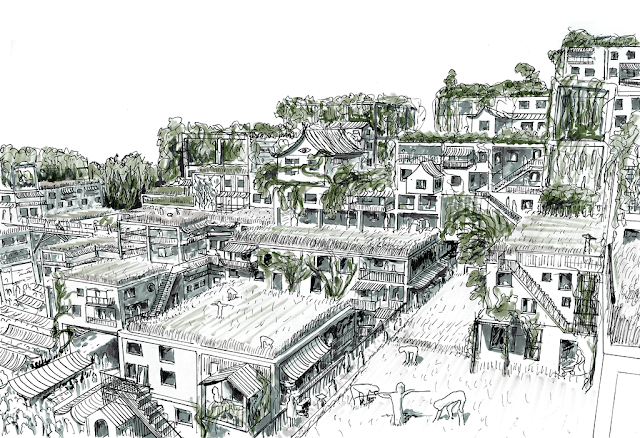 Paracity is the seed of a third-generation city. A modular biourban organism grows in response to human needs while at the same time ruining the surrounding industrial city. Seeds of Paracity are germinating within Taipei in the collective gardens, illegal settlements, abandoned burial grounds and other undeveloped sites. These seeds will contribute to the biological rehabilitation of the surrounding city through urban acupuncture. From these points, Paracity will spread out along the covered river and irrigation channels. Ultimately, the biourban organism and the static city will reach a biologically sustainable equilibrium that will give birth to the third-generation city. ark

Posted by Marco Casagrande at 8:51 PM