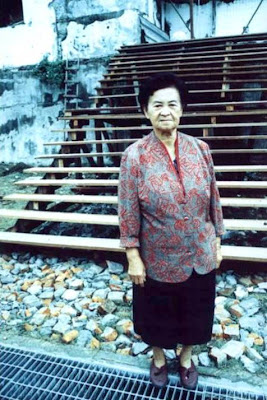 The matriarch of the Treasure Hill illegal urban farming community is Missis Chen. She is a grandmother and a respected leader. Treasure Hill had been continuing old urban farming traditions inside the modern Taipei, until the city government decided to change the farms into a park and bulldoze the mushrooming settlement to history. In the official industrial mind the vegetable gardens were to be changed in to lawns, controlled nature for industrial citizens. Taipei people protested. They felt the connection with the Treasure Hill veterans and showed respect to their way of life. When facing the citizen activism and protests the official city backed down – Treasure Hill could stay. Now the urban farming enclave is one of the New York Times’ must see locations in Taipei. Missis Chen is leading the way towards the third generation Taipei from an illegal settlement.

Neighboring the National Taipei University in the Gongguan district is the housing area of the professors and other intellectuals connected with the university. Inside the housing district is an abandoned construction site hiding inside a corrugated steel wall. This is the kingdom of Missis Kuo, who is leading a community of high class urban farmers occupying a controversial site inside the city; a site whose ownership and future development is somewhat unclear. Missis Kuo and her intellectual community are farming in the construction site just like the illegal community of Treasure Hill by the Danshui River. Modern Taipei starts immediately on the other side of the corrugated wall. Inside could be a thousand years ago. Similar kind of ad hoc farms and gardens are everywhere in Taipei. The third generation city has already rooted deep in the organism of the industrial city; the official city is ruined by the normal people. Ruin is when man made has become part of nature.

The second generation city is the industrial city, which was brought to Taipei by the Japanese. The industrial city is not dependent on the natural forced the same way as the first generation city; on the contrary, the relationship toward the nature can be quite hostile, nature is seen as an outsider and not needed. Nature tends to want to break the machine. Together with the industrialization a western based urban planning was introduced. This urbanism has nothing to do with nature.

In a long time nobody questioned industrialization. Machines and mechanical power meant good life. The life on the county side was hard labor, same with fishing – hard. City and industrialization provided easier life, a more comfortable life and so the cities were where the intellectuals were concentrated and where the man became modern. Outside the cities were the country side and the nature. The outsiders, the peasants were viewed as simple and not progressive people. Industrial cities were where the human development was focused.

The big shock came in the 1960’s. United States and Soviet Union were the competing powers in the world and the race to the space and to the moon was somehow chosen to be the ultimate showground, who would be more advanced in technology. The Russians were the first to get a man to the space but then the Americans collected the jackpot: a man was on the moon.

It was the biggest media event in the world history when Armstrong stepped to the moon. The entire world was watching, but nothing much was found – only a couple of stones. The big find was when Armstrong turned back toward the Earth and for the first time man could see our own planet from outside. The image was shocking. The blue planet with its oceans and moving clouds was clearly a one big living organism. The photos of planet Earth reached everybody and this was when the industrial development was the first time seriously questioned. In the photos one could clearly see that not everything in our planet was supporting life, but some things seemed to work against it. We could see the polluted rivers and the dead forests. We could see how the industrial cities were spotting the Earth as almost dead spots.

A wave of environmental consciousness hit the mankind, but then what – what to do? We can not just kill the lights of a city or collect away the fridges. No, man is not built that way. We must keep everything that we have. We talk about the pollution created by the fossil fuels and try to reduce the oil consumption. But then what? Is the rest of the oil going to be left in the ground – no. Reduced consumption or not, every last bit of the oil will be used anyway. We are pretty much living with the same question like Armstrong now – what to do with the blue planet and our ways of living on it.

The people don’t need to change, the intellectuals need to. Normal people have been maintaining the connection with the nature all the time; the first generation city has never really died. The normal is close to nature and the normal has been preserving the life in the city. The connection is in enclaves inside the official Taipei; in places where the industrial city finds difficulties to function: by the river shores, in illegal settlements, in abandoned construction sites. The grandmothers are farming in the street crossings and on the roofs. The third generation Taipei is already happening, but is somehow underground. The normal and the ecologically conscious has become anarchy.

Urban and environmental designers feel the need of the third generation city, but the environmental planning has become a sad joke trying to form the normal and the down to earth into strange environmental design utopias and sad ecological technocracy. Design, as so often in the city, tries to replace reality. Grandmothers are producing vegetables in street corners, but artists are boosting with organic farms for show.

Urban environmentalism must not be separated from humanism. An open table is needed. The third generation city is not a design question - there is no copyright for life. Granny power must overtake; the third generation Taipei must be ruled by grandmothers.