7-ELEVEN is the flower of a metropolis. Like a mushroom it is attached to the hidden energy flows of the city surviving on the balancing between highly calculated profit making mechanisms and community sense. It is justified to compare the 7-ELEVEN network to the acupuncture needles dealing with the Chi of the city, but what is the Chi then? And if the city needs acupuncture, what is the disease? 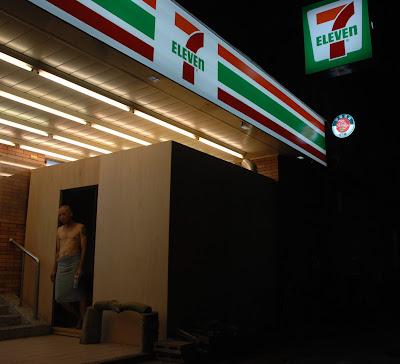 There is 5 million people in Finland and 2 million saunas. If sauna, alcohol and tar don’t cure you – you will die, goes the old saying. Public saunas are real acupuncture for the city. People come out from their homes and from their works to sweat together as a naked community. People relax this way and talk a bit. In sauna everybody is naked, so there is no titles either. A workingman can talk to the naked president. This has always been.

In Gonguan I found the real acupuncture needle of the community. A secret vegetable garden was hiding in the ruins of the industrial city. This had been a site for military buildings, that had got demolished, but the site never redeveloped. Taipei –style this spot of sleeping capitalism was surrounded by a corrugated steel wall to keep the people out from the ruin. Similar kind of walls are everywhere in Taipei. Ruins are everywhere in the fast grown modern city. 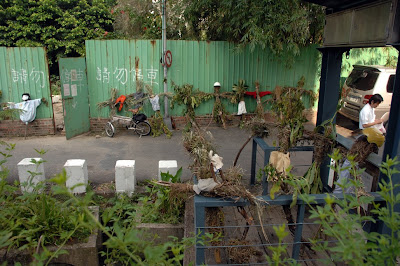 The Gonguan grandmothers observed the site for long enough and then occupied the abandoned construction site for a community garden. Similar kind of gardens are everywhere in the fast grown modern Taipei. Grandmothers dominate the no-man’s land. This I find very hopeful for the industrial city. Ruin is full of hope and grandmothers are full of hope. They are preserving the First Generation connection between the modern man and nature.

I guess it is from these spots of hiding urban farms that the new layer of landscape urbanism will grow on top of the existing Industrial city. That will be the Third Generation City, when the man-made becomes again part of nature – like a ruin. Grandmothers are now cultivating these true acupuncture points of the industrial urban body of Taipei and taking care of the Chi, the common subconscious of the city. Soon it is time for the rest of the citizens to start helping the grandmothers a bit, so that the garden can grow over the corrugated steel walls and over the walls of the rivers. Too long time have these composts been hiding inside the city, soon it is time to turn them over to fertilize the whole urban body. 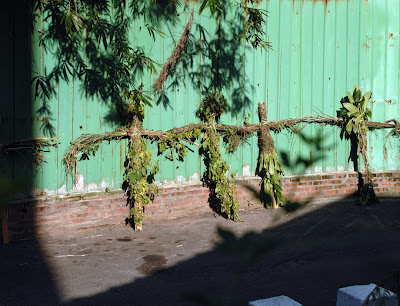 I asked the grandmothers of the secret garden in Gonguan to teach the Shy-Chien -students in making scarecrows. During one week the army of post-urban scarecrows was preparing behind the corrugated steel walls of the secret garden until it marched into the neighborhood. The students were asking normal shop owners, if they would take care of a scarecrow as a symbol of the green man inside them, and nobody refused. The scarecrows were a 1:1 scale test of the preparedness of the modern normal city to accept the third generation. In Gonguan the army of scarecrows became the local acupuncture points towards the 3G.

The hidden gardens of Taipei felt like the public sauna for me. I constructed a small public sauna in front of the 7-11 Gonguan to think more about the Third Generation Taipei. I found it hopeful that with one step you could step into a modern convenient store, the flower of urbanism or 1000 years back. And that these two exist the same time. 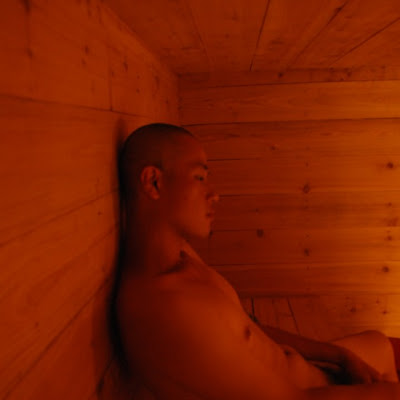 The Third Generation City will not take away your fridges or turn down your lights. It will just grow on top of you. The dictatorship of sensitivity has begun!

City must be a compost

City must be a compost. It must be able to be turned around to provide life instead of suffocating the natural growth. Nature wants to take the whole city, which is perfectly understandable. Only the man's position is questionable: will he be part of the nature taking over the urbanism? The third generation Taipei will be a ruin that is designed to function in human use. It is a ruin that is shared with modern man and nature.