A robust response to a challenging environment.
by Catherine Slessor, The Architectural Review, March 2009 Conceived as a meditation on the decline of Finnish rural life, the project - punningly entitled Land(e)scape - involved hoisting a trio of redundant timber barns on to spindly stilts to make them look as though they were walking out of the countryside and migreating to the city. In a final nihilistic flourish, the structures were set on fire and transformed into blazing memorials to the loss of a pastoral idyll.

Casagrande is now in partnership with Taiwanese Frank Chen (Project Manager), and together they recently completed a house in the north of Taiwan, near the Datun Mountains. Set on farmland next to a river and surrounded by tree-covered hills, the remote, rural site has echoes of the walking barns project. Yet for all its bucolic charm, the environment can be harsh, with intense heat in summer and frequent typhoon winds, componded by periodic flooding from the river and seismic activity.

The commission came from a retired couple who wanted to leave the city and embrace a simpler, rural lifestyle, farming cherry trees and bamboo. When approached to design the house, Casagrande was living in an abandoned tea factory in the area and had become familiar with the locale.

Though climate and site conditions are challenging, he regards his design as an adaptive, responsive entity, capable of ridingthem out "like a boat". To protect against flooding, the house is raised above the ground on a platform, which also acts as a terrace, extending the living area. The main volume, which contains living and sleeping quarters, is a narrow, single-storey wedge, buttressed along its long, east side by a smaller structure housing a bathroom, kitchen and sauna.

The arrangement neatly demarcates served and servant spaces, but equally importantly it also enhances structural stability in the event of an earthquake, the smaller body acting to brace and support the larger one.

The roof and walls of the main volume project out at the wider north end to form a sheltered enclave for al fresco dining. The roof is also brought into play as a sun deck, accessed by an external flight of stairs.

Perhaps because Casagrande helped to build the house himself, constuction and materials have a rough-edged simplicity and honesty of expression. Nothing is fudged or covered up; you take it as you find it.

The timber frame is clad in horizontal timber planks, giving the house a barn-like appearance that chimes instinctively with the rural setting. In some parts of the wall, gaps are deliberately left between the planks to aid natural ventilation and help deflect stong winds.

A freestanding brick heart anchors the living area, and strategically placed glazing frames and defines vistas out to the landscape. A strip of windows at floor level, for instance, is designed to offer views only when occupants are seated on traditional floor cushions.

For the cladding, Casagrande choser meranti, a tropical hardwood with a reddish hue resembling Canadian pine. Though strong and economical, with good moisture and insect resistance, it tends to be more commonly used in Taiwan for formwork because of its rustic appearance.

"When Taiwan was under Japanese rule, there was a vigorous culture of building with timber", says Casagrande, "but now brick imported from China's Fujian province has become the norm. In this project I wanted to reconnect with an older building tradition and make use of so-called disregarded materials."

The timber also underscores Casagrande's notion of the house as a lightweight vessel, capable of weathering difficult conditions with ease and elegance.
CATHERINE SLESSOR 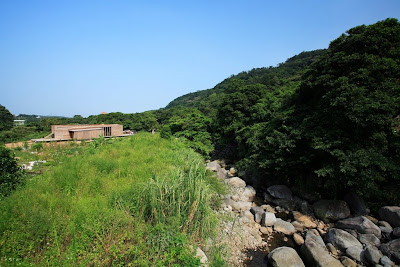 The house lies next to a flood-prone river. 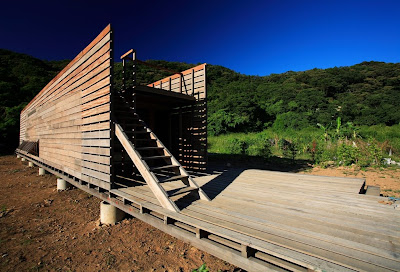 Concrete piers lift the building off the ground, protecting it from flooding. 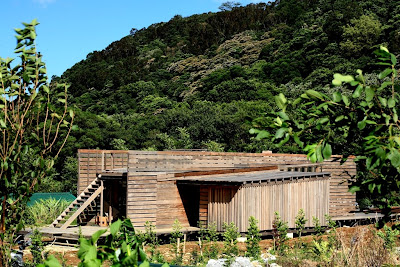 A smaller, secondary structure braces and supports the main volume. 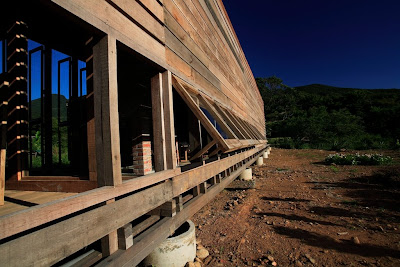 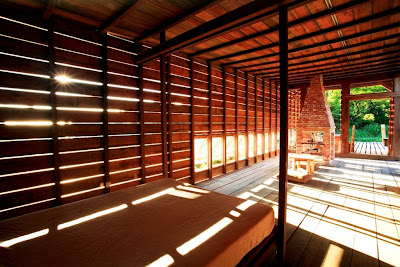 Low windows offer outside views only when occupants are seated on the floor. 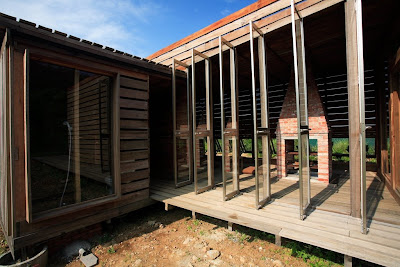 Natural ventilation cools the interior in the hot summer. 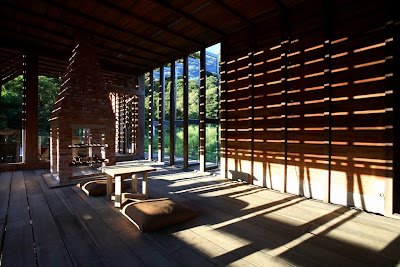 A brick heart anchors the living space but the main material is melanti, a robust timber usually used in formwork. 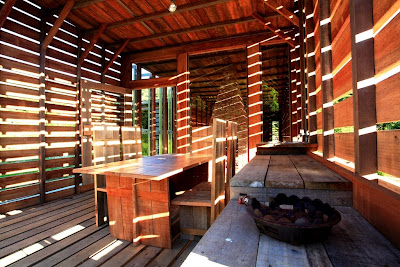 Chen House built in 2008 by Marco Casagrande, Frank Chen and the crew is almost as striking as Tadao Ando’s Azuma House. NO, this house may be better than Ando’s 1976 masterpiece - Ando’s early houses tried to recreate ‘tough’ living environment (coldness, dampness, and other inconveniences), but Chen House simply embraces its environment, including typhoons, earthquakes, flooding and heat. Chen House reminds me of the very basic of Judo and Aikido, “yield to win.”
- What We Do Is Secret, Japan. 11.5.2009

Architect Marco Casagrande has long been known to push the limits from his early art installations to his provocative, artful architecture a decade later. Completed in 2008 with architect Frank Chen, Chen House is a unique home in Sanjhih, Taipei County of Taiwan. Set on a cherry farm, this open-design home was created to withstand the oft-harsh and unpredictable winds, water and heat. Constructed of concrete and mahogany, this well-planned structure sits slightly above the land, allowing flood waters to flow beneath it, leaving it unscathed. Air too shall pass – the seemly haphazard placement of wood panels allows wind to blow through the home, cooling it down during the heat of the day. Light filters into the house through its barely-there walls, illuminating simple yet stylish interiors. Inside, a thoughtful layout does much more than provide places for eating, bathing and sleeping. “The smaller bathroom and kitchen unit acts as a kicker stabilizing the wooden structure during the frequent typhoons and earthquakes.” Now there’s a house that was built to last!
- Trendir - Modern House Designs. 14.5.2009


There is really something very attractive about this project...kind of like
when you arrive at a cliff, and are drawn to it's edge so you can look down.
- Kevin, Urban Environment Design, China. 20.5.2009
Posted by Marco Casagrande at 11:28 PM