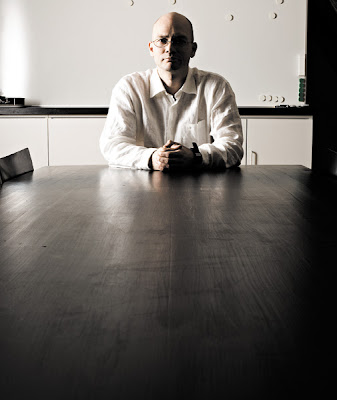 Q1: How’s life as an architect in Finland in general?
A1:
Architects are egoistic and boring people everywhere. The new generation with Facebook and other light stuff feels better. In Finland we are like Masonries that occasionally force themselves to dance jazz. Boring.

Q2: We notice that, besides architecture, you have also done a number of artworks in Taiwan. What’s the story behind your involvement with this country? How did it get started?
A2:
I have done artworks and architecture in many places besides Taiwan, but Taiwan I like a lot. They are very anarchistic in a Dao way. It is not officially even a country – which I found strong. Taiwan is somehow beyond the national state.

It started when architect Ti-Nan Chi invited me to a conference “Urban Flashes” in Taipei. Chi tries to be a Dao-man, but actually he is an anarchist designer. Anyway, I was fascinated about the Urban Flashes and Taipei. I found the people to be good and the city to be very much energized by the citizens. On the other hand I could not understand how they let their rivers to be in so bad condition. Pollution was everywhere and pollution is worse than a sin. Worse than corruption. I love rivers. Danshui River must be back in its full a character. Pollution in Taipei and the polluted river was a trouble for me - and I am looking for trouble. So. I wrote to the Taipei City Government that they will die. Mainly because of ecological reasons. No reply. Then a year after in Linz, Austria Chi was arranging another Urban Flashes where I met another Taiwanese architect Roan Chin-Yueh, who got interested in my death-letter. He started to turn stones over in Taipei and soon I was invited there back.

Q3: Can you tell us more about the Treasure Hill project in Taiwan?
A3:
This is why I got back to Taipei, with the help of Roan. The city government wanted me to give them an alternative solution for future development in order not to die. They provided me a lot of data and information, but all was useless. The city in the data was completely different than the city on the streets. I could do no planning with this – just lie. In the end a rebel professor Kang Ming Jay took me to Treasure Hill, which in that point was under destruction by the same city government that had invited me to Taipei. I found Treasure Hill, an illegal urban farming settlement, to represent pretty much the same values that I was invited to present to the official Taipei. I changed my program and started to work with Treasure Hill ending it’s demolition process and then legitimizing the settlement as an example or sustainable high-density urban living.
Treasure Hill is a matriarchal community directed by Missis Lee, while as Taipei is patriarchal. The matriarchals are always closer to earth. Anarchist grandmothers will rule Taipei in the Third Generation City –condition. C-LAB: in grandmothers we trust.

Q4: You have done a few saunas as art projects in the past (Floating Sauna in Norway and 7-11 Sauna in Taiwan) and Chen House has got a sauna as well. Is there an intentional link of idea that you want to explore or a hidden message you want to convey or simply just because you are a Finnish?
A4:
One has to take the liberty to travel one thousand yeas back in order to realize, that the things are the same.

Q5: For Chen House, it is obviously not a traditional house but rather an experimental one. Did the client have a negative reaction the first time you presented the design? How did you manage to convince them?
A5:
I had been living already a year in the same river valley in “extremely experimental conditions” occupying an abandoned tea factory ruin and living there together with plants and insects. I am studying the meaning of Ruin. Chen House is a high-fly lounge compared to our T-Factory ruin.

The clients trusted me. I was rather present in the whole design and building process. There is no air in-between the design and architecture here. Flesh is in-between. FLESH IS MORE.

Q6: And what was their comment when it’s finished?
A6:
They have been living there for a year now. Also the surrounding people like the house. The garden is flourishing.

Q8: According to our online research, we found out that you were personally involved with the construction of the house? Can you share with us what you have learnt during the process?
A8:
The best way to learn the site-specific environmental conditions is through physical labor. Flesh is more.

Q9: What is your dream project? What kind of object or architecture would you like to design most?
A9:
It is bullshit to say that scale limits the quality or the budget. The key of all art is to be present. I want to design a shopping centre ruined by jungle.

Q10: If you can choose what would be the next country you want to have your work realized and why?
A10:
Russia. I don’t know why.

Thank you very much for your time, Marco.
Thank you Jirawit. Anytime you need a good sauna: I am here.