ARCHITECTURE OF THE WEAK!

As mentioned previously, one of the densest and most ambivalent projects in the 2009 Shenzhen & Hong Kong Bi-City Biennale of Urbanism\Architecture is the “Bug Dome” pavilion installed on the outdoor space northeast of the Shenzhen Civic Center. The sculptural space is designed by WEAK! Architects, a collective consisting of Hsieh Ying-Chun, the Taiwanese architect best known for his philosophy of architecture as social activism, Roan Ching-Yueh, a Taiwanese architectural curator dealing with many of the same issues, and Marco Casagrande, a Finnish architect interested in structural ecologies and all manner of new age theories of spiritual construction. 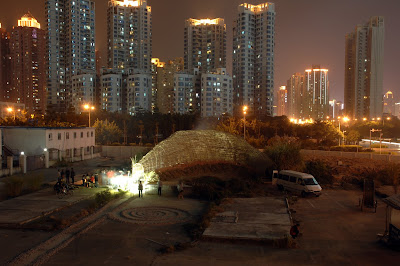 Their project here is formally interesting, forming a loosely woven shell amenable to both open air performances and more casual social activities along the lines of Hsieh Ying-Chun’s former projects with tent-based amphitheaters in suburban Taipei. Its shape recalls a partially submerged cicada skin, semi-translucent and emerging organically from the ground. It is constructed of solid bamboo ribs shaped into arches perpendicular to the length of the sculpture, while thinner strips of bamboo are woven between these ribs. Broken bricks and mud lend support like primitive buttresses. Although it is physically possible to enter from either end, one side houses a flat stage, and the remaining ground surface is covered with small stones that conceal upward-facing electric lights. The structure is immediately placed on an overgrown construction site immediately abutting a residential camp for temporary workers, but the skyscrapers and official municipal buildings of Shenzhen are visible on the remaining three sides.

I first experienced the “Bug Dome” one day before the official opening, when project curator Xu Ya-Zhu invited the Taiwanese participants in the biennale to host a small event in and around the structure. Unfortunately Hong Kong poets Liang Wendao and Liu Wai Tong did not make it in time for their scheduled readings, so instead a discussion with the architects was held on the makeshift stage. The ensuing conversation strayed quite far from the subtle aesthetic ambiguities of the project itself, and several participants proceeded to negate the urban experience with an at times naive and utopian tirade on the merits of rural communities. Notably, Roan Ching-Yueh mentioned that architecture has no reason to become remain as complicated as it has become, that civilization did not appear out of a vacuum in the early 20th century, and that there is no reason to pay the government to dispose of our waste. 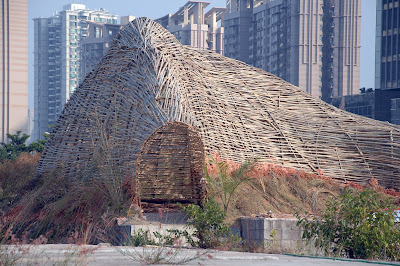 All three of these architects deserve the utmost respect for their suspicion of breakneck urbanization and Futurist urbanism, and even more so for their willingness to work with vernacular materials and styles in the service of disadvantaged rural communities. Some of their projects, including Marco Casagrande’s work on the Treasure Hill area in Taipei, have been absolutely groundbreaking in terms of how we think about the limits of growth for the Chinese cities of the future. But an inability to accept multiple planes of construction and levels of systemic integration is simply futile. The “Bug Dome” successfully negotiates the territory between the construction, metropolitan architecture, and rural past of Shenzhen, but it is not a habitable structure. It would be foolish to claim that this kind of work could represent any kind of solution–even theoretical–to the problems facing south China.

Thankfully, the architects also distributed a broadsheet paper called “Cicada” during the opening days of the biennale. (DOWNLOAD CICADA PDF) The textual and visual materials contained therein lay out the discursive basis for these projects sensibly and realistically, a far cry from the rhetoric that led me to all but dismiss the pavilion during that opening event. In this conception, “weakness” is a form of architecture based on insect construction, rejecting engineering in favor of a bricolage that collects debris from around the site for its structural materials. In a remarkable conceptual move, the figure of the ruin is viewed as a form of third-generation urbanism in which the man-made is integrated into natural systems. 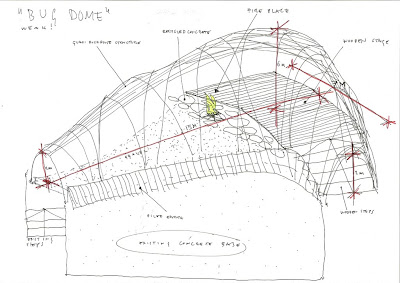 WEAK! projects are thus paradoxical attempts at the design of ruins. In another project, the “Post-Industrial Fleet,” decommisioned commercial ships are berthed outside of Tianjin and inhabited as units for residence, recreation, and survival. What is at stake here is often the scale of the design of systems: although Roan Ching-Yueh may have overstated his case when he claimed that there is never a need to choose the “big system” over the “little system,” this is indeed a category of analysis to which more attention needs to be paid. This is something akin to open-source architecture, consisting of shanzhai hardware components that can be remixed and recombined according to the exigencies of the moment. In southern China, there may be no other way.

Posted by Marco Casagrande at 11:18 PM