The students and professors represent all together 19 nationalities and were mostly urban nomads. They were driven to the frozen lake by determination of finding something primeval that can show them some new and fresh ropes within the disciplines of architecture, environmental art and urban design. After two weeks on the frozen lake they also got some fish.

Architecture is environmental art. The students were given a task to make a personal nomad shelter and collectively to build a movable Nomad Sauna on skies and an Aurora Observatory. Under the ice there were beautiful salmon related fishes - trout and arctic char. Local Knowledge was needed in order to get them up. The farmers around the lake were generous in helping the students and more than that curious to see if they could manage in the demanding Nordic winter conditions. For the course the survival was not enough - the students had to manage to construct in 1:1 scale and find beauty through their actions in the frozen environment.

We had a cottage by the lake kindly supported by the Bjørnådal family. After opening up first time the cottage and building up the fire the students went in to dry their clothes and soaked souls and we realized that they will never come out. After that the cottage was highly regulated and the students had to rather do hard forestry work in small groups heating up the body to dry the clothes up from inside. There were partly two meters of snow and plenty of trees.

After the daylight we got together at the Sæterstad farm which worked as our base camp to eat dinner and dry up clothes. This was also the natural time to talk and review their designs. To design is not enough. Design should not replace reality and there is only one real reality - nature. Step by step all the students were exposed to the elements and they started their modern archaeology towards the organic. Plans and design were changed; best of them were melted away. Some worked in the garage of the farmhouse, the most hard core students day after day on the frozen lake. They also got some fish and observed the aurora.

One evening we had a road kill ptarmigan for dinner. The students dried their socks hanging in the living room lamp. Young Agnes Born was singing us sensitive blues songs while the wings and legs of the ptarmigan were being frozen for her collection and getting rid of lice. Belgian guys made some Flemish pizza and the vegetarian students survived amazingly with muesli and risotto. At some point some of them were also reverted in eating raw meat. The Italian ladies made for us and the farmers tiramisu and chocolate cakes after Professor Bjørnådal corrected the group from selfish behaviour and advised that there existed also another kind of economy: giving. 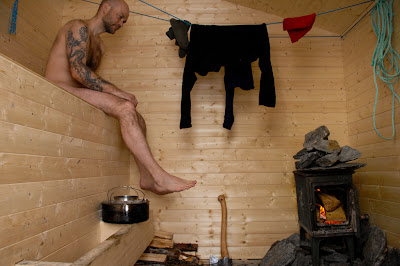 The farmers accepted the students and the community took over the constructions. Now the Nomad Sauna is on skies during the winters and floating on the community's swimming beach during the summers. Ice fishers are using the Aurora Observatory which also has a fireplace to straight prepare the fresh fish. The individual structures are ending up around Varntresk tourist road as permanent works of environmental art. We got full support from the local people including fish and goat meat.

All in all the experience on the frozen lake was good. It was great to see the students from different disciplines working together and facing the same big voice of nature. Academic discipline means nothing. Nature means everything. Human nature as part of nature is the hardest discipline.

This is how Lund University Department of Sustainable Urban Design students Guoda Bardauskaite and Suzanne van Niekerk review the experience in Norway:


In the words of environmental architect and anarchist Marco Casagrande, ‘survival is just the first step in discovering true beauty.’ The Lapland native believes in an almost cruel method to his medium, where human intentions come naturally second to nature’s. It is with this in mind that one needs to approach his workshop on the frozen lake of Røssvatnet in subarctic Norway. Over the course of ten days, students were to join in on the creation of a nomadic city on the ice, both weathering and embracing the cold and wind, and alternating blizzards and slush.

There were twenty of us in total. In addition to Marco himself, his wife, Taiwanese journalist Nikita Wu, his long time friend, Norwegian architect Hans-Petter Bjørnådal, and Czech masters student and carpenter-extraordinaire, Jan Tyrpekl, made up the organizational team. The sixteen students, comprising of a whopping nineteen nationalities, came from four universities and four different artistic disciplines: Environmental Art students from Aalto University in Helsinki, Sustainable Urban Design students from Lund University in Sweden, Architecture students from UEM in Madrid, Spain and one Fine Art student from Bauhaus University in Weimar, Germany.

Together we were going to create, explained Marco over generous helpings of Finnish vodka, a city of subtle proportions: a mobile city for nomads to respect and be humbled by nature. Individually, the students would make their own small ice fishing shelters come aurora observatories, but together we would create two key communal focal points: a large scale observatory and a sauna. As Marco liked to point out, a sauna is, simultaneously and contradictory, both an indicator of civilization and a chance for humans to return to a more bass nature.

From the beginning, the workshop was spontaneous and intuitive. The students were unaccustomed to each other, building process and materials were unsecured, and we camped in the local schoolhouse for the first two nights after our original accommodations fell through. Despite the circumstances though, there was an underlying sense of optimism present from day one. The workshop attracted a certain kind of spirit, and without complaint, we quickly came to appreciate the quirks of having road kill for dinner, wearing garbage bags as rain protection without the slightest sense of irony, and the joy of merely being out of the wind, even while being completely soaked to the core.
This was also a workshop about doing. We were encouraged to lay down our pencils and start experimenting with structures. It was about self-discovery, and Marco left us to our own devices. If we needed a consultation, he could be found on the ice, quietly fishing. There was no lack of inspiration, though. There is a rich heritage present in the Sami culture, and many of the citizens of Hattfjelldal were keen to talk with us. Every evening around a fire, Marco too would tell us tales of nomadic culture and myths and stories of his childhood. Perhaps the most prolific, though, nature affected both our design and our design implementation.

We experienced a massive range of weather conditions; from beautiful, clear sunny days with crisp snow underfoot, to sleet and hail, soggy snow, and powerful winds. With the former solid ice surface of the lake turning into a continuing series of thigh-high pools of slushy ice water, it took an afternoon to move the sauna the hundred or so metres from the shore on to the site. We had envisioned an easy and graceful move, hoping a helicopter pilot at the farm would transport it for us, dropping it into place without so much as a fuss. Of course, that was not to be, and instead it took the combined effort of ingenuity and raw strength of the entire group. And when it finally was settled, with the observatory in place next to it, we felt an overwhelming sense of accomplishment.

As the weather continued to worsen, Marco grew consistently cheerier. Keeping in line with his philosophy, it was almost as if the weather were conspiring with him to teach us the importance of survival. According to him, every architect needs the foundation of working with primitive tools under harsh conditions for their education. It should not be easy. But in truth, some things were made extremely convenient for us. The residents of Hattfjelldal treated us to their incredibly warm generosity. They taught us how to fish, provided us with materials, lent us tools, and avidly followed our progress by reporting on it in the local paper. Our hosts on the farm where we stayed organized a meeting with the local community where we had the opportunity to present our work and answer questions.

The interest was so great that we learned that over 200 people, including the mayor, planned on attending the opening of our city. Which turned out to be an interesting, complicated day. From five in the morning, we were awake and on the ice, finishing our work in what can only be described as miserable weather. As midday – the scheduled opening time – approached, we sincerely wondered if all these people would still attend, in the gale force winds and relentless sleet. Yet they did come – some wading through the ice water, and some on snowmobiles and skis, and all with contagious good moods. Moss, a Greenlandic drummer, played while a young girl sang ritual Sami songs; the mayor, instead of opening the city with a ribbon cutting, drilled a hole in the ice, and we all indulged in the most exquisite local cuisine of hot fish soup and goat
sandwiches.

In retrospect, it is tricky to evaluate the effectiveness of the workshop considering the prevailing chaos and not particularly polished final result. After such an inconsistent, unpredictable and uncontrollable process, it is not surprising that the nomadic city ended up looking like a haphazard collection of random shapes, reminiscent of ruins. But can one wish that a workshop centralized on survival be done in an orderly fashion? According to Marco’s philosophy, ruins are a tipping point when man-made becomes part of nature. Even the news that one student’s ice structure had melted into nothingness by the time of the opening was met with satisfaction – as we impose ourselves on nature, we have a responsibility to leave as small a trace as possible. Ultimately, it was about the process. Everyone had vastly different outcomes in their structures and artworks, but that is a positive thing. What this workshop really gave us was an opportunity to live and work for ten days in a place devoid of contrivances and ego, a “true reality”. 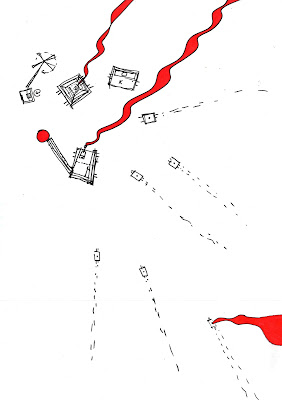 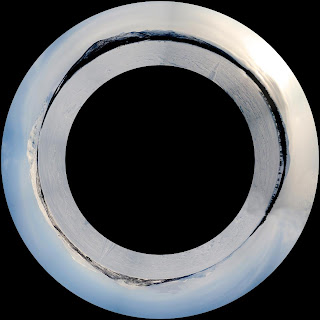 Posted by Marco Casagrande at 12:55 AM